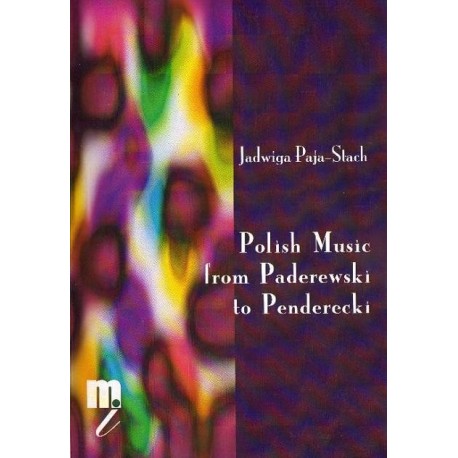 This book contains a review of the most important movements in 20th-century Polish music. It also presents profiles of those composers who are judged to have made valuable contributions to both Polish and world musical culture. Part 1 provides a context to the themes explored in Part 2.
Chapter 1 contains a sketch of the development of Polish musical culture in the context of historical changes, an area which still requires thorough research, preferably conducted using a cross-disciplinary approach including sociology, political science and history of music. The present outline refers the reader to works describing some areas of this field of knowledge, but these should be treated rather as possible directions to be followed in further research. Chapter 2 presents the major musical ideas operating in the œuvre of 20th-century Polish composers, set against the background of contemporaneous composition in Europe and the United States, both of which exerted an influence on Polish culture. Although this chapter could well form the subject matter of an entire book, its aim in the present work is to examine two particular aspects: the musical ideas which were widespread in the circles of composers at a given time, and the musical thought of distinguished artists from the Modernist and Postmodernist eras, whose ideas ‘turned the wheel of history’, or whose music, by virtue of its originality and beauty, made a valuable contribution to the history of 20th-century music. [...]
Part 2 in an attempt to show what unites the œuvre of Polish composers, enabling us to ascribe them to the same musical movement. By trying to capture the idiomatic characteristics of their music, we will be better placed to determine the originality of their style, not to mention their enduring contribution to music history. Part II does not, however, present detailed analyses of individual works (‘intraopus style’), but refers the reader to literature where such analyses may be found. When discussing individual works, the focus is restricted to those characteristics which attest to the original musical thought of the artist in question. In the chapters devoted to composers born at the end of the 19th century, and whose œuvre falls within the 20th century, three composers stand out: Paderewski, who played such an extraordinary role in promoting Polish culture all over the world; Karłowicz, whose symphonic œuvre was of great significance within the music of his time; and Szymanowski, renowned both for his brilliant stylization of Polish folklore (comparable only to Chopin’s), and for an artistic career which led to the modernization of compositional technique.
Among the generation of composers whose artistic careers took off in the inter-war period, space is devoted to Aleksander Tansman, Józef Koffler, Grażyna Bacewicz, Roman Palester, A ndrzej Panufnik and Witold Lutosławski. Each of these composers succeeded in creating their own original musical style. The music of Grażyna Bacewicz is marked by a profound knowledge of the esoteric art of violin playing, paired with a particularly skilled shaping of clear form. Indeed, we would be hard put to find any other artist of her generation with such an extraordinary artistic personality; as both virtuoso and composer, she was outstanding. Her instrumental œuvre , associated with both Neoclassicism and certain characteristics of mid-20th century avant-garde music, is distinguished by its finely chiselled detail, ripeness of sound, and also by its masterly use of string instruments, all of which make it possible for us to speak of Bacewicz’s highly individual style as ‘violinistic’. Extraordinary originality of compositional style also characterizes the music of Lutosławski and Panufnik. Each developed his own pitch organization system, and each achieved a unique expression. The œuvre of both composers has elevated them to the pantheon of world musical culture. From the next generation, Tadeusz Baird, Kazimierz Serocki, Henryk Mikołaj Górecki and Krzysztof Penderecki are presented in more detail. The œuvre of the latter is striking in character, and for avant-garde times is quite extraodinary. Penderecki’s music began to appeal to mass audiences when he started drawing from the inexhaustible well of traditional values, though not without continuously creating his own compositional devices and concepts of large musical forms. Undoubtedly, it will only become possible for us to describe the Penderecki phenomenon more accurately after some time has passed. Nevertheless, it has long been obvious that his œuvre — regardless of the controversial opinions it provokes — continues to be performed in concert and opera repertoire worldwide, thereby securing a place for Polish music in universal culture.
The singling out of almost a dozen composers does in no way mean that other composers did not also create facinating and noteworthy works. In fact, quite the contrary, 20th-century Polish music is a treasure house of interesting sonoristic ideas and original formal perspectives. However, a proper discussion of all individual compositional styles would require a vast, multi-volume work, and is thus outside the remit of this study. The aim of the volume, therefore, is to present a broad panorama of phenomena in the music of the Modernist and Postmodernist eras, and to refer the reader to a wealth of literature that has already been produced on the topics touched upon in the present work. This literature, aside from numerous monographs on different composers, treats individual themes in the area of the music from the 19th and 20th centuries, including the reception of 19th and 20th century music; music criticism; music festivals; film music; musical institutions and organizations; and the output of composers and performers from a given region or city/cultural center.