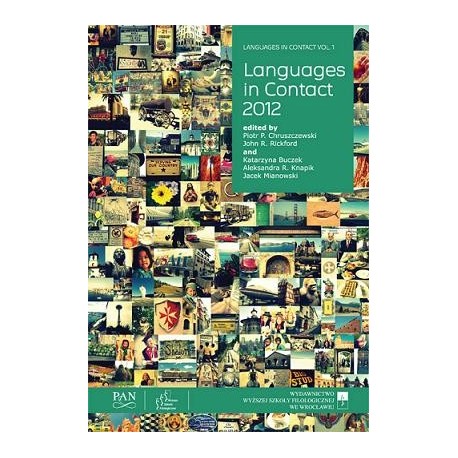 Within the context of cultural pluralism and multiculturalism, the edition of a new book series overseen by the Committee for Philology of the Polish Academy of Sciences, Wrocław Branch, together with the Philological School of Higher Education in Wrocław, under the title of Languages in Contact is vivid proof of unity in diversity. This unity in diversity is rendered in the new books series in two ways: through the interdisciplinary methodological apparatus of anthropological linguistics, contact linguistics, sociolinguistics, cognitive grammar, communicology, and studies of culture; and through the diversity of the corpus to be analyzed (literary texts, runic texts, sign languages or visual images). The present volume is composed of papers, many of which were presented in Wrocław at the conference “Languages in Contact 2012.” The volume brings new and challenging insights into the studies of the languages in contact phenomenon: an analysis of the distribution of diagnostic features in the Atlantic English-lexified Creoles and across English-lexified contact languages (Andrei A. Avram); a critical reinterpretation of various models for the development of Slavic languages (Paul M. Barford); a fourfold perspective on the societal mission of the “Official English” movement within the fundamental tenets of American language ideology (Sándor Czeglédi); a comparative interlingual lexical contact analysis between Standard Hungarian and English (Anglo-)Hungarian (Éva Forintos and Szilárd Szentgyörgyi); a plea for using experimentally developed semantic networks of word associations as possibilities to study language mechanisms (Izabela Gatkowska); an analysis of the directions of blend elaboration as a cultural means of creative concept change (Agnieszka Gicala); the importance of communicology in the comparative study of the East and West cultural dimensions of human perception (Richard L. Lanigan); an anthropolinguistic approach to the early runic texts in the British Isles (Jacek Mianowski); a critical insight into the sociolinguistic conditions of the usefulness of the English language as shaping a given multilingual setting (Agnieszka Stępkowska); an interdisciplinary approach to women’s clothing as a discursive mechanism of constructing the female body as gendered (Andrea F. Szabó); a reinterpretation of the concept “Language Adaptive Operators” within the context of language adaptive strategies in human communication (Wiesław Szałaj); a critical insight into the glottogonic theories of language and a plea for framing gestures as a substantial component of early human communication (Agnieszka Szczepaniak); a comparative cognitive grammar approach to Polish Sign Language (PJM) sign order and Polish word order (Anna Ścibior-‑Gajewska); and an analysis of “bound semantic loan” as an overlapping concept between loan translation and semantic loan (Alicja Witalisz).

Andrei A. Avram
Diagnostic Features of English Creoles: A Follow-up

Paul M. Barford
Modelling Past Language Change and the Archaeology of the Early Slavs

Éva Forintos, Szilárd Szentgyörgyi
Language Contact Phenomena in the Written Language of the Hungarian Community in the United Kingdom

Jacek Mianowski
On the Early Instances of Writing in the British Isles: An Anthropolinguistic Perspective

Agnieszka Stępkowska
Multilingual Practice and English in Interpersonal Contacts: The Example of the Canton of Zurich

Andrea F. Szabó
A Feminist Critical Discourse Analysis of the Discursive Construction of Gender in Alice Munro’s Fiction of the 1990s and 2000s through Descriptions of Clothing

Agnieszka Szczepaniak
In the Beginning There Was the Gesture. About the Selected Theories on Language and Speech Origins